In May we introduced you to Lucy Rivers Bulkeley. Having become the first European woman to complete the ‘4 Deserts Grand Slam’ back in 2010 (250km self-supported across the Atacama, Gobi, Sahara and Antarctica), Lucy is now attempting to climb the 7 Summits. She has already successfully reached the summits of Aconcagua, Elbrus, Kilimanjaro, Kosciuszko and most recently, Denali. Discover Lucy’s story below from the recent climb of Denali as we follow Lucy on her journey to be the first woman in the world to conquer both the 4 Deserts and the 7 Summits.

“The mountains are calling and I must go” – John Muir Arriving in Talkeenta feels like going back in time. 120 miles north of Anchorage in Alaska, it is a small sleepy town which has more planes than cars and the mayor for the last 20 years has been a cat called Stubbs! Lying on the edge of the Denali National Park, it is the starting point for my climb. Mt Denali (6190m) is climbed in the old fashioned alpine style where we are self-sufficient; carrying all food, fuel, tents and equipment needed for our time on the mountain and the combined weight of the rucksack and sled was about 70kg. It’s amazing what you suddenly realise you don’t need when you have to carry it yourself. After a 2 day delay due to high winds, we finally flew onto the glacier. 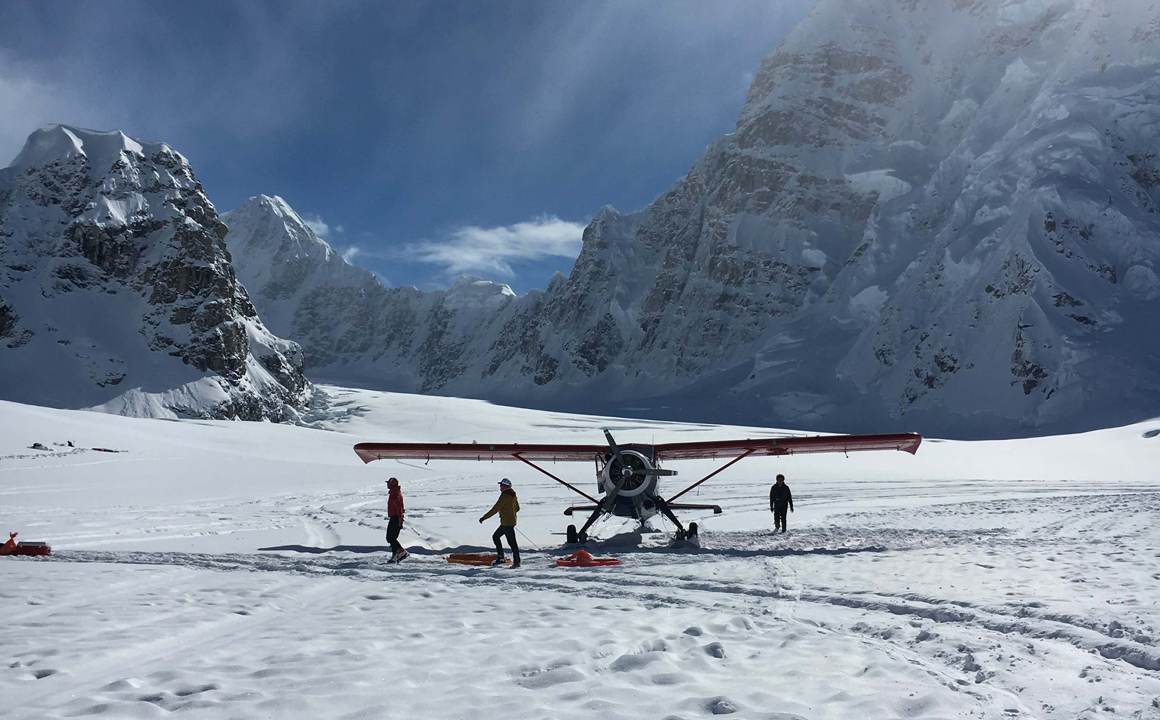 ‘Arriving at base camp’

I always find the first night cocooned in my sleeping bag the worst as it dawns on me that once again, I will be relying on wet wipes instead of a lovely long bath at the end of every day as well as eating dehydrated food for the foreseeable future. Being so far north, just below the Arctic Circle, there is very little darkness – the head lamp is swapped for an eye mask. Saying that, it takes a while for the sun to properly rise in the mornings and it is seriously chilly until it does! 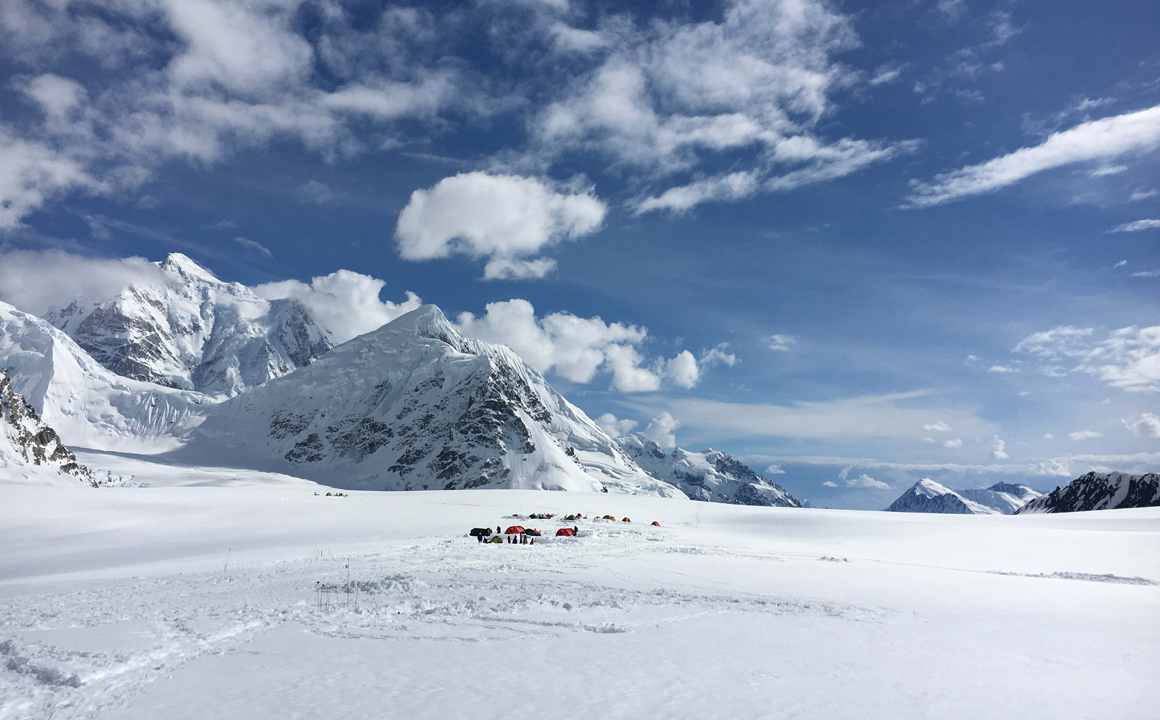 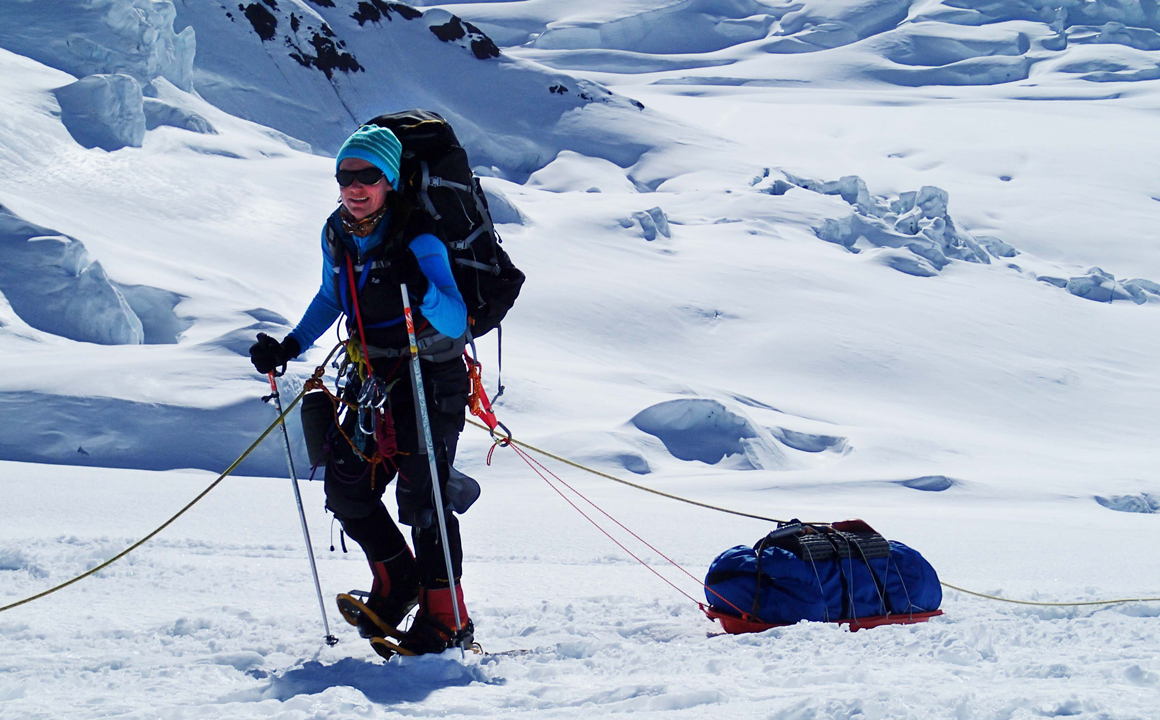 ‘Fully loaded up on the lower glacier’

After a night at base camp, we set off across the lower glacier to camp 1. The motto is “climb high, sleep low” which is the best way to help the body acclimatise to the altitude. Between base camp and camp 3, we followed the same rough pattern over the coming days. Carry half way to the next camp (with extra fuel, food and clothing) and cache it 10ft deep in the snow, move up to the next camp and then back carry to collect the cache on a ‘rest day’. Obviously this was weather dependent. On the lower mountain we were incredibly lucky and the weather gods were on our side as we made it to Camp 3 within a week but we were then stuck there for 6 days sitting out heavy snow and strong winds. There were a lot of card games played when we weren’t building snow walls to protect our tents. 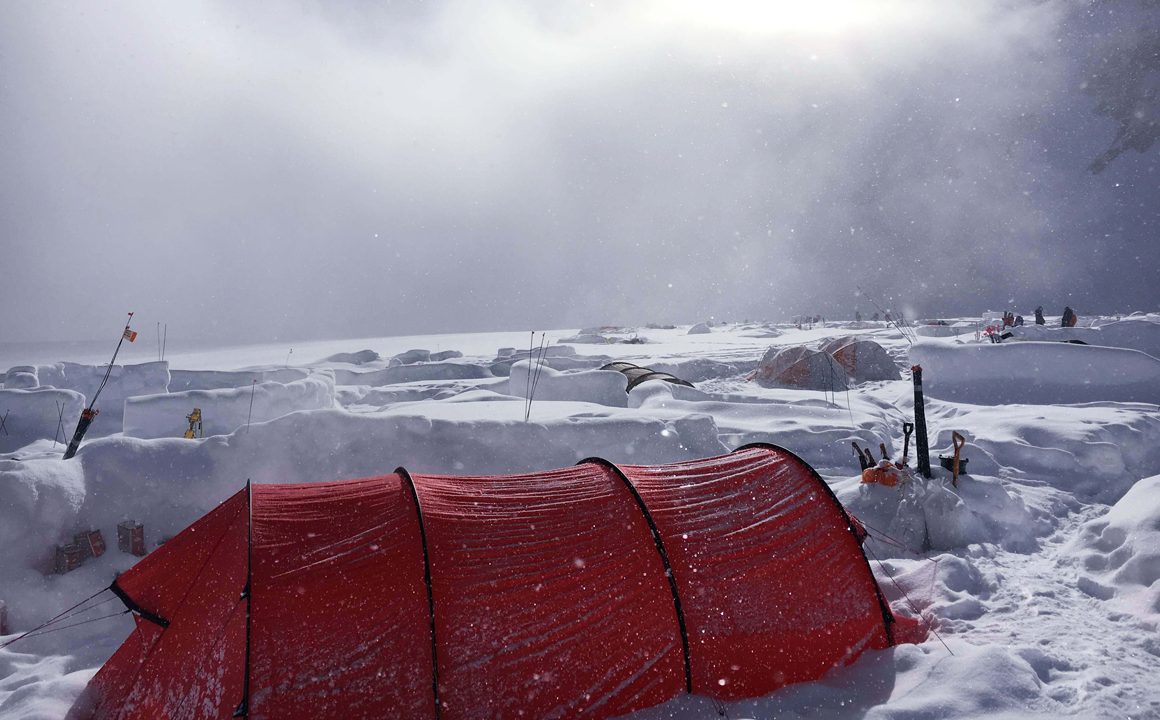 Ideally we need to see 4 decent weather days in the forecast before leaving for high camp. On the first day of semi decent weather, we took all the extra kit that we would need for our summit push and cached it on the ridge. Luckily, we only carry a rucksack above camp 3 and it’s a 2 hour climb to the bottom of the fixed lines, which is a 400m vertical section up, before reaching the high ridge. A relatively short round trip, taking just over 5 hours. 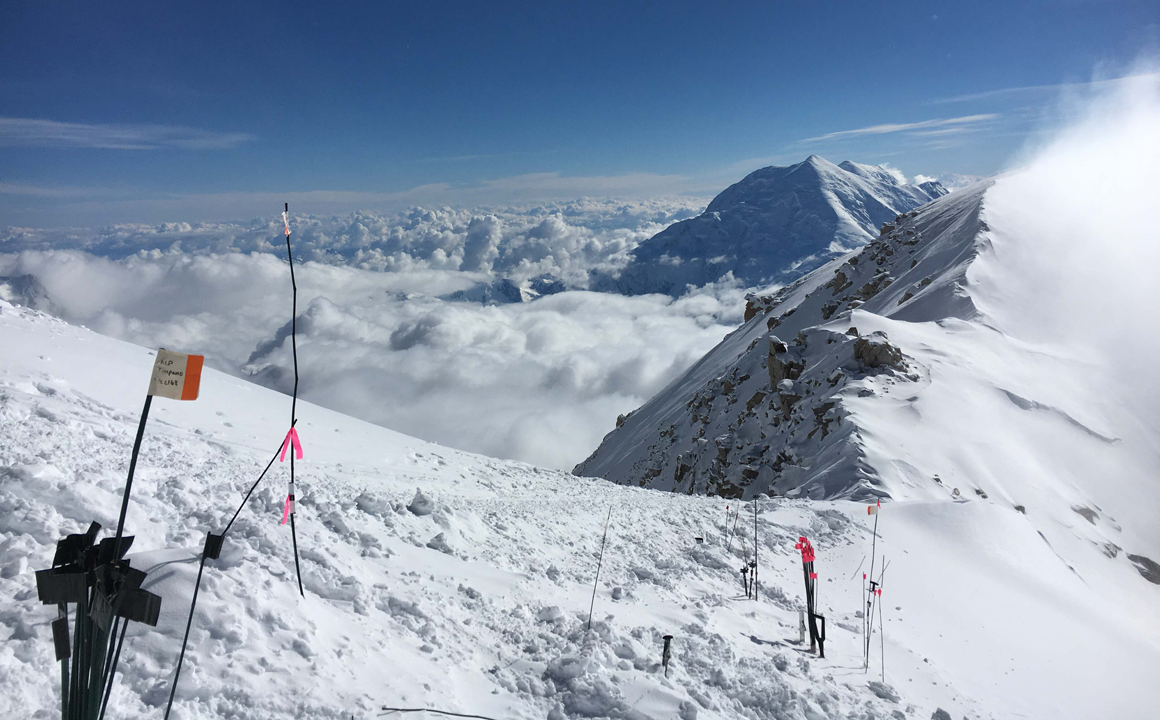 ‘Cache on the high ridge above C3’

The forecast was predicting low winds for a couple of days and we made the decision to head up high – unfortunately, it was wrong! We made it safely to high camp just as the winds picked up and the snow started. We were then tent bound in a white out for the next 48 hours which was far from ideal with the forecast due to get worse and the temperature hovering at -20c without including the wind chill factor. We couldn’t make a summit attempt and with high winds, it was too dangerous to try and descend the ridge. Unfortunately, while we were tent bound, our guides, along with a few others from neighbouring teams, were involved in a large rescue attempt at 2am. A fellow climber was suffering from severe altitude sickness and frostbite an hours climb above high camp – what would normally be a straight forward rescue in daylight turned into a 5 hour mission with 7 highly qualified guides trying to descend with the injured man in the storm. They managed to get him back to high camp but tragically he died from his injuries.

The winds eventually dropped enough for us to safely descend to camp 3 and it was time to reassess. The rest of my team were planning on heading back to base camp but I had the option of joining another team to head back up for another attempt, with a guide I had climbed with a few years ago. I was feeling strong, acclimatised and it was too good an opportunity to turn down. 2 days later, I found myself heading back up along the ridge to high camp. This time we had clear skies and clouds below us which were stunning. 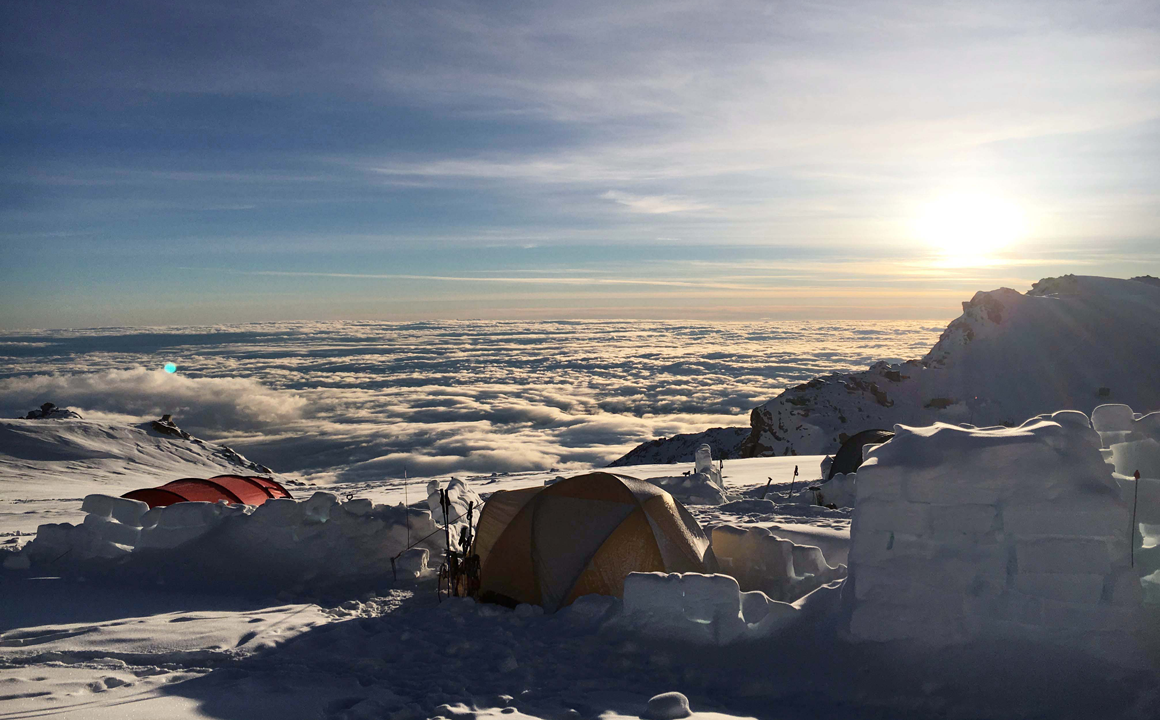 ‘High camp above the clouds’

I was woken up at 4.30am by a huge thud which I presumed was an avalanche nearby but was told that it was in fact an earthquake. Not what I wanted to hear while in a tent at 5000m! Luckily, when I woke up again a couple of hours later, it was a perfect summit attempt day – very few clouds, low winds but freezing cold. Loaded up with all the essentials we would need in case of an emergency, we set off. Amazingly, the weather gods were on our side this time and after 8 hours of climbing, I was able to stand on the summit. Very chilly but with incredible views and our team were the only ones there for about half an hour. Amazing! Descending back to high camp was almost worse as the adrenaline is running out yet your body is beginning to feel the effects of the past 3 ½ weeks at altitude. My dehydrated shepherd’s pie at 10pm that night, safely tucked up in my sleeping bag at high camp, has never tasted so good! 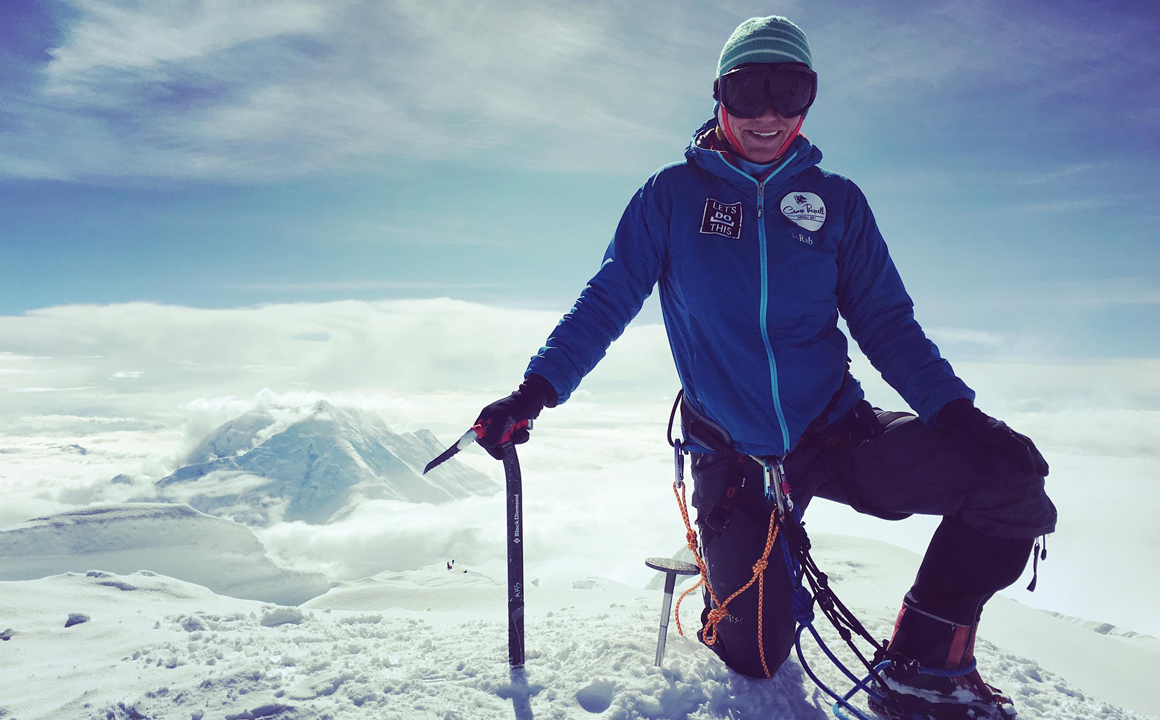 We made the decision to do the ‘death march’ back to base camp (descend from high camp without stopping at any of the lower camps) and left early the next morning after packing up our tents for the final time. Exhausting but everyone was keen to head back to civilisation and the lower glacier was safer if you travelled at night. As it was, there were far more crevasses than when we ascended which kept the heart rate up and we finally made it to base camp just after 4am, all in one piece. 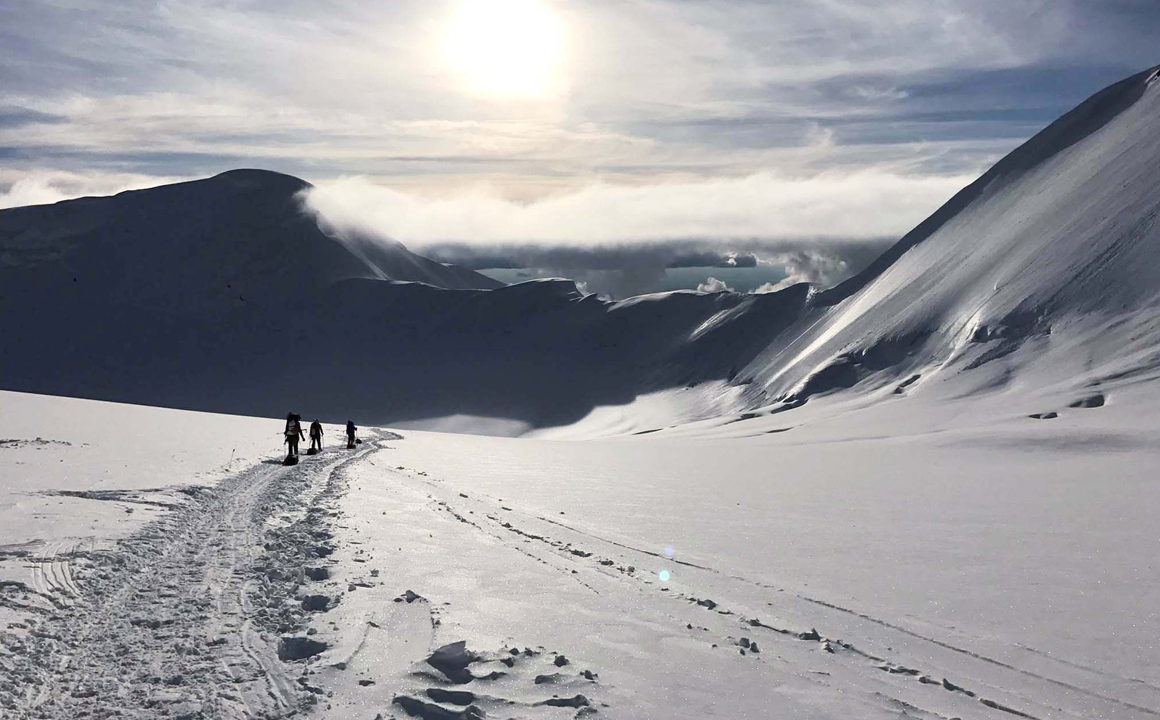 ‘Descending to Base Camp’

After a couple of hours of much needed sleep, in just my sleeping bag under the bright Alaskan skies, we were flown off the glacier back to sunny Talkeetna for a much needed shower, fresh food and a couple of large celebratory drinks after nearly 4 weeks in a tent!

It was incredible trip and I was incredibly lucky to be able to move teams to make a summit attempt, let alone stand on the top as the success rate this year was only 23%. Now time to plan the next one…..5 down and 2 to go. #Bulks7Summits