450 years ago, on 26 April 1564, a man who has left his signature on time was baptized in Stratford-upon-Avon, England.

Regarded as the greatest playwright and poet of all time, William Shakespeare created art through his writing, making his writing itself an art. He created many linguistic expressions that remain in current English. His writing tools - quills that he would have shaped and sharpened himself - were the perfect witness to his greatness, translating onto paper his literary genius, brought down to us through his works. 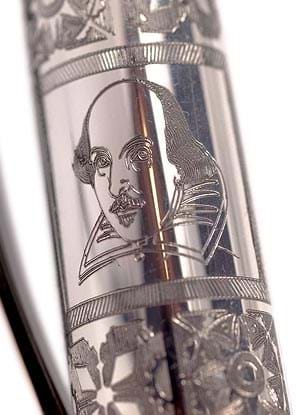 Therefore it is with a collection of writing instruments that we celebrate William Shakespeare today, 450 years after his birth in Stratford-upon-Avon - an anniversary traditionally celebrated on 23 April.

The pen, as a natural extension of our hand, gives shape to our thoughts, a mirror to ourselves, into our insights and our mistakes. The fountain pen is the writing instrument best able to give life to our ideas. It demands more time for ourselves and by ourselves. By its nature, the fountain pen forces us to think more about what we write, and by doing so makes us write better. That is why this collector's writing instrument is not just a beautiful object to own, but is also an object to be used, an experience, a way to leave our mark.

We are proud to have worked on this project with the SHAKESPEARE BIRTHPLACE TRUST, who are dedicated to promoting and preserving his

works, life and times. We are deeply grateful to them for allowing us access to their archive and treasures, which have inspired the development of the pen.

In 1564 William Shakespeare was born in Stratford-upon-Avon, son of a prosperous glover. Educated at the local grammar school, he received a thorough education in classical literature, reading many works that would influence his own writings in later life. His profound understanding of the human condition and unmatched facility with words led him to London and the theatre during its most brilliant period in England - the Elizabethan Renaissance. By 1592 he was recognised as a significant playwright; by his death, as the outstanding dramatist of an extraordinary age. Today he is accepted as the greatest ever playwright, speaking to all ages and cultures.

His humanity, wit and intellect were the grounding for the unmatched skill of his writing, but his colleagues also had high respect for his draftsmanship, without which all might have been as nothing. The editors of the First Folio, John Heminges and Henry Condell, elegantly sum up these complementary skills in their introduction to the First Folio:

"Who, as he was a happie imitator of Nature, was a most gentle expresser of it. His mind and hand went together: And what he thought, he uttered with that easinesse, that wee have scarse received from him a blot in his papers."

The writing instrument, be it stylus, quill pen or fountain pen, is the means by which the ideas, insights and understandings of outstanding men and women are passed on.

Made from oak - the traditional wood of old England - and antique silver, the cap of the pen shows the imprint of the ring believed to be Shakespeare's', held in the archives of the Shakespeare Birthplace Trust.

The cap itself, enriched by a clip decorated with a quill, is fully handmade in antique silver - as is the nib holder and tip of the Roller Ball - and is decorated with patterns from the lace collar on the Stratford Portrait of Shakespeare.

An image of a writer, on the left side, complements the reproduction of one the most famous portraits of Shakespeare on the right.

On the bottom of the pen, also made in antique silver, the original Parish Register entry is engraved: "Gulielmus filius Johannes Shakspere."

The nib, in 18kt gold, and available in the Italic style, is engraved with William Shakespeare's initials, W.S.

The pen is produced in a Limited Edition of 450 piston filling Fountain Pens and 234 Roller Balls in silver & oak wood.

A luxury edition with the cap in 18k gold is also available, in a Limited Edition of 23 piston filling Fountain Pens and 23 Roller Balls.

Each pen is presented in an elegant wooden box, which reproduces the shape of an old writing desk.