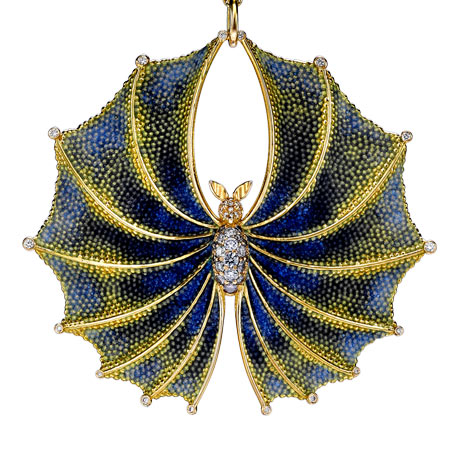 Enamels were added to gold and silversmiths' work between the fourth to the seventh century. It became of the greatest importance in Byzantine goldsmiths' work when Christianity became the religion of the State, and has been used to the modern day. There are a number of different techniques available to the enameller which we can look at:

Champlevé. This is the simplest and probably the oldest form. It consists of cutting out spaces on a thickish plate of metal, and filling these in with powdered enamel. It is then fired and afterwards filed down level with the metal and then polished. The few specimens of Saxon work, such as King Alfred's jewel, are enriched in this way.

Cloisonné is a similar process, except that the spaces are made by wire of gold, silver, or hard brass soldered on to the metal, usually copper. These ‘enclosures’ are filled with enamels applied in the form of a paste. The work is then fired and the surface is given to it by rubbing the enamels over with stones until the whole surface is smooth. The best specimens are hand polished and should have a soft, precious surface like a beautiful fruit.

Pliqué à Jour is a technique producing translucent enamels held in an open framework made by soldering individual wires or delicate metal strips to each other, rather than to a supporting surface as in Cloisonné. Developed in France and Italy in the fourteenth century, this technique has been used largely for making vessels, jewellery, and, in Russia, demitasse spoons. This kind of work is extremely delicate.

There can be no question that enamelling is the fittest decoration for fine metalwork. Being vitrified, it is permanent, and being lustrous and translucent it gives a gem-like effect to the metalwork it adorns. It is a colour-art before all else, but this does not prevent it affording ample scope for the finest designing and drawing.